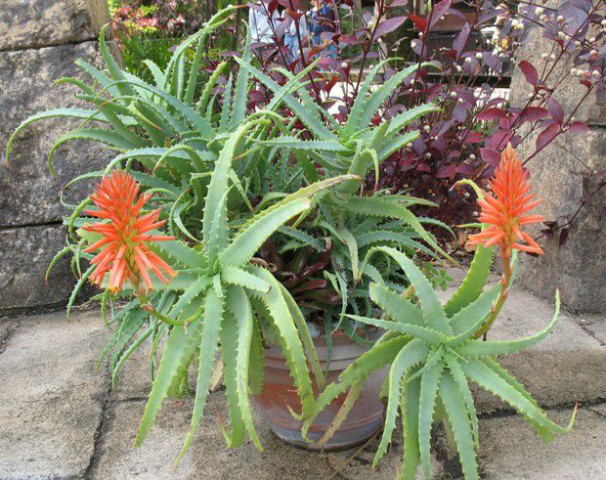 Botanical description. Evergreen perennial. Aloe is a genus of the family Asphodelaceae, in which there are over 200 species. The center of their distribution is East and South Africa, although some species of the genus Aloe are also found in the Mediterranean and some areas of India. As an example, you can describe:
scarlet awesome. This is a truly stately plant with a stem that reaches a height of 2 - 3 m (sometimes even 6 m) and has numerous leaf scars, and on the top - a powerful vigor of lanceolate leaves. The leaves are fleshy, about 50 cm in length, 10-20 cm in width and 5 cm in thickness, with purple-colored spines, especially along the edge and on the underside. In the leaf axils in May-June on long peduncles inflorescences develop in the form of elongated brushes, numerous flowers of which reach a length of 3 cm and have a coloration in the form of alternating pale-red and greenish bands.
- Aloe arborescent - Aloe arborescens L. with height up to 4 (10) m. The roots are friable, strongly branched. Stem erect, branchy, abundantly covered with alternate leaves. Leaves are greenish-gray, smooth, matte, juicy, sessile, linear-lanceolate with pointed apex, spiny-pointed at the edges. Flowers large, pale orange, campanulate, tubular, collected in the inflorescence - a brush. Fruit - stuporotrugnaya, almost cylindrical capsule. Seeds are numerous, grayish-black, unevenly trihedral. It reproduces vegetatively by rooting the children, the tips of shoots. The culture blooms in the winter months, but not regularly, with the seeds usually do not form. It is widely distributed as a room, ornamental plant. In indoor conditions it blooms very rarely, the height of a houseplant is up to 70 cm. The heat-loving, at a temperature of +1 ...- 3? C perishes. It is bred as a medicinal plant in the Caucasus, Crimea and Central Asia.

The homeland of the aloe tree is South Africa. Other species of aloe in a wild state also grow in Madagascar and in Arabia.

Collection and procurement. If the leaves are cut, then watery juice flows out of them, an unusually bitter taste. It is used to obtain a medical product. The juice is in the secretory cells that surround the sieve-shaped part of the vascular bundle (on the cut this layer of cells has the shape of a crescent). Cut the lower and middle leaves, reaching 15 cm in length. Collect leaves and children of different ages several times a year. The leaves are cut and crushed in such a way that the juice from them can be quickly collected in a vessel. Then it is condensed by evaporation over an open fire or in a water bath - a sabur is obtained. After removing the foam, it is poured into vessels, where it freezes. In this form it is an apothecary product, which is most often processed into galenical preparations (drops, pills, candles).

Healing action and application. Aloe - a potent and reliable laxative, which manifests its effect in the large intestine. Only in the form of a galenic preparation or together with other laxatives, it is a part of numerous laxatives in the form of drops, pills, tablets, pills and candles. Tincture, extract and other preparations from scarlet also play a certain role as bitter gastric agents and to stimulate the secretion of the gallbladder. Juice (fresh) is used for chronic gastritis with low acidity, with a tendency to constipation, to improve appetite, to increase the body's resistance against infectious diseases; externally - with purulent wounds, burn, osteomyelitis with an open purulent focus, trophic ulcers, abscesses, phlegmon and other purulent diseases; for rinsing with diseases of the oropharynx, gums; compresses with aloe juice - for skin tuberculosis, lupus, eczema, radiation head dermatitis. In gynecological practice - with erosion of the cervix. Aloe syrup with iron - with chronic and acute diseases of the gastrointestinal tract associated with posthemorrhagic anemia, with hypochromic anemia of various etiologies, after infectious diseases and other debilitating diseases and intoxications. Extract (liquid) - with blepharitis, conjunctivitis, keratitis, iritis; with chronic gastritis, peptic ulcer of stomach and duodenum, bronchial asthma, gynecological diseases. In Korean medicine - as a bitter gastric remedy (to increase appetite); with habitual constipation; emotional melancholy, insomnia, gastritis, eye diseases, scabies, ringworm, absence of menstruation.

Aloe juice from fresh leaves: cut off the lower leaves, carefully washed with boiled water, cut into small plate-shaped pieces 0.2-0.3 mm in size, placed in cheesecloth and squeezed by hand or using a juicer. Take it in fresh form.

Aloe juice from fresh leaves. Fresh juice of leaves, aged in the dark, mixed with lard and honey according to the following recipe: lard (or goose fat), butter, honey, cocoa in powder - 100 parts each, juice of aloe leaves - 15 parts; 1 tablespoon of this mixture is stirred in 200 ml of hot milk. Take 2 times a day as a biostimulator.

Use in homeopathy. The original Aloe tincture in dilutions from D is used in homeopathy with weakness of the digestive organs. Partially treated with this medicine is colitis (inflammation of the large intestine) with the involvement of the liver. As an external tool tincture is used for burns (including x-ray irradiation) and poorly healing wounds in the form of compresses (dilution with water 1:10).

Side effects. Aloe can cause kidney irritation only in case of an overdose. With proper application, aloe is easier to transfer than one would expect, knowing the composition of this plant. Pregnant, as well as those who have a tendency to bleeding from the genital area, you can not use scarlet. Avoid prolonged use of aloe, since in this case, excessive excretion of mineral substances (especially potassium) is possible. You can not use scarlet and intestinal obstruction; this applies to all potent laxatives. Laxative preparations from aloe can not be used for hemorrhoidal, uterine bleeding and menstruation, as they can cause bleeding due to blood rush to the abdominal organs, as well as for long periods of pregnancy. It is not recommended to use them for diseases of the liver, kidney and bladder, with cardiovascular diseases, hypertension and people older than 40 years.