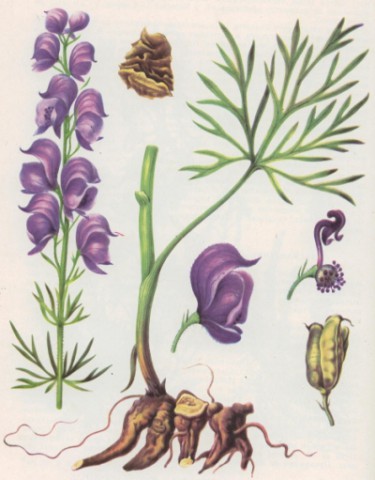 Deadly poison! It is protected.

Used parts: young, this year root tubers, as well as the entire aboveground part during flowering.

Botanical description. A perennial plant with thick succulent roots, which annually form a new tuber, while last year dies. The upright stalk is up to 120 (sometimes 150) cm in height with deeply incised 5-7-lobed leaves. Dark blue helmet-shaped flowers on short pedicels are collected in a long, multicolor, terminal brush. Blooms from June to September. It occurs in the mountainous regions of the whole of Central Europe, especially in moist high mountain meadows, where the soil is rich in nutrients. About 300 species are distributed in the Northern Hemisphere. In Russia and the CIS grows about 75 species. It often grows in continuous thickets. Already here it should be noted that this plant is highly poisonous and it can not be used on its own without the advice of a doctor. It is necessary to warn children about this. Poisoning can occur even if the child has been carrying a tuber for a long time in a wet hand. Fresh tubers plants have the smell of horseradish, so the plant is often confused with celery. Aconite - one of the most poisonous European plants! In Siberia, there are several types of wrestlers. All of them, perennial herbaceous poisonous plants with round-heart-shaped dissected leaves, irregular flowers and fruits leaflets.

Collection and harvesting: the aerial part during flowering - from June to September.

Active ingredients: aconitine and other alkaloids.

Healing action and application. In pharmaceutical doses, aconite acts through the nervous system to the entire body as a whole. In the first place is an analgesic effect in neuralgia, sciatica and gout. It should also be noted the beneficial effect of aconite at high temperature and colds (especially in the common cold and bronchitis). Doctors sometimes designate it or him inside in the form of tincture, and it is external in the form of liquid grits or ointments - for putting off or taking out of pains. Self-treatment, with the exception of homeopathic remedies, is prohibited!

Use in homeopathy. Homeopathic remedy Aconitum is made from fresh flowering plants. It is often prescribed in the dilution of D4 in febrile conditions, occurring during colds, as well as in flu, neuralgia, sciatica and other pain syndromes. Even with some heart complaints, Aconitum is prescribed. By taking Aconitum D4 (3-5 times a day for 5-10 drops) at the first signs of a cold, when the chills and sneezing begin, it is possible to prevent the development of influenza infection.

Application in folk medicine. In ancient times, aconite was known more as a poisonous plant than a medicinal plant. They were greased with the tips of arrows and spears, as well as blades of swords. Pliny only reports on its use in the treatment of eye diseases. At the same level, medicine of the Middle Ages remained. Homeopathy became interested in it for the first time, and then aconite was used in folk medicine. Colds, pains of different nature, rheumatism, gout, insomnia, inflammation of the digestive tract and respiratory tract are the main spectrum of its use. Mainly used spirituous herbs or wine with the addition of aconite. Refuse the independent use of this plant, one of the most poisonous in our flora.

The use of aconite for the treatment of malignant neoplasms is rooted in antiquity. In the famous Tibetan treatise "Chzhud-shi" dating back to the 12th century, the authorship of which is attributed to Buddha Shakyamuni (or to the very real person Yutog Yondan-gonpo), several separate species and collective images of aconite are mentioned: "The wrestler of various leaves combined with other herbs brings relief tumors of the stomach, when water from the lungs falls to the liver and kidneys. " Plutarch's description of the poisoning by the aconite of the soldiers of Mark Antony has been preserved. Warriors, in whose food the aconite fell, "lost their memory and were occupied with turning over every stone in their path, as if they were looking for something very important ...". From this poison did not know the antidotes, and therefore even a law was issued that forbade buying the poison of aconite. Violation of this prohibition was punishable by death. Therefore, to treat this plant should be very, very cautious.

Side effects. Fortunately, aconite poisoning due to improper application of it as a medicinal plant is very rare. Children are also unlikely to be tempted by its fruits or other parts of the plant. Nevertheless, one should know about the signs of poisoning them. Very soon (after a few minutes) there is a burning sensation in the mouth and itching all over the body. At the same time, a profuse sweating begins, accompanied by chills and a sharp sensation of cold. Further symptoms of poisoning will be nausea, vomiting and diarrhea. Finally, limbs become numb, breathing slows down and becomes superficial, and within 20 minutes death may occur as a result of collapse. First-aid measures should be taken without delay: immediately contact the emergency or hospital! Try to cause the victim to vomit, giving him a drink of salt water (1-2 tablespoons of table salt to a glass of water) and irritating the pharynx with a finger, feather or a handle of a spoon. After cleansing the stomach, give a drink of activated charcoal (20-30 g shake in water). Never give anything to a person who has lost consciousness.